Heartwarming Acts of Kindness from Restaurants Around the World

As of March 16 2020 at 8.27 PM ET, the number of deaths from coronavirus in the world has hit 6,500. In the US, states like New York, Connecticut, and New Jersey will be banning gatherings of over 50 people, while states like Ohio and California will close bars and restaurants. In other parts of the world, countries like Malaysia and Germany have closed their borders, and Switzerland has declared a state of emergency. On the individual level, these conditions have sparked a fear of food shortage among global citizens and many have begun panic buying.

It is difficult to stay positive in this kind of situation, but despite restaurants taking a heavy hit to their business, such as suspensions of operations, many of them have chipped in to help make things a little better. Here are heartwarming moments where restaurants around the world helped boost the morale of healthcare workers at the frontline of the war against coronavirus: 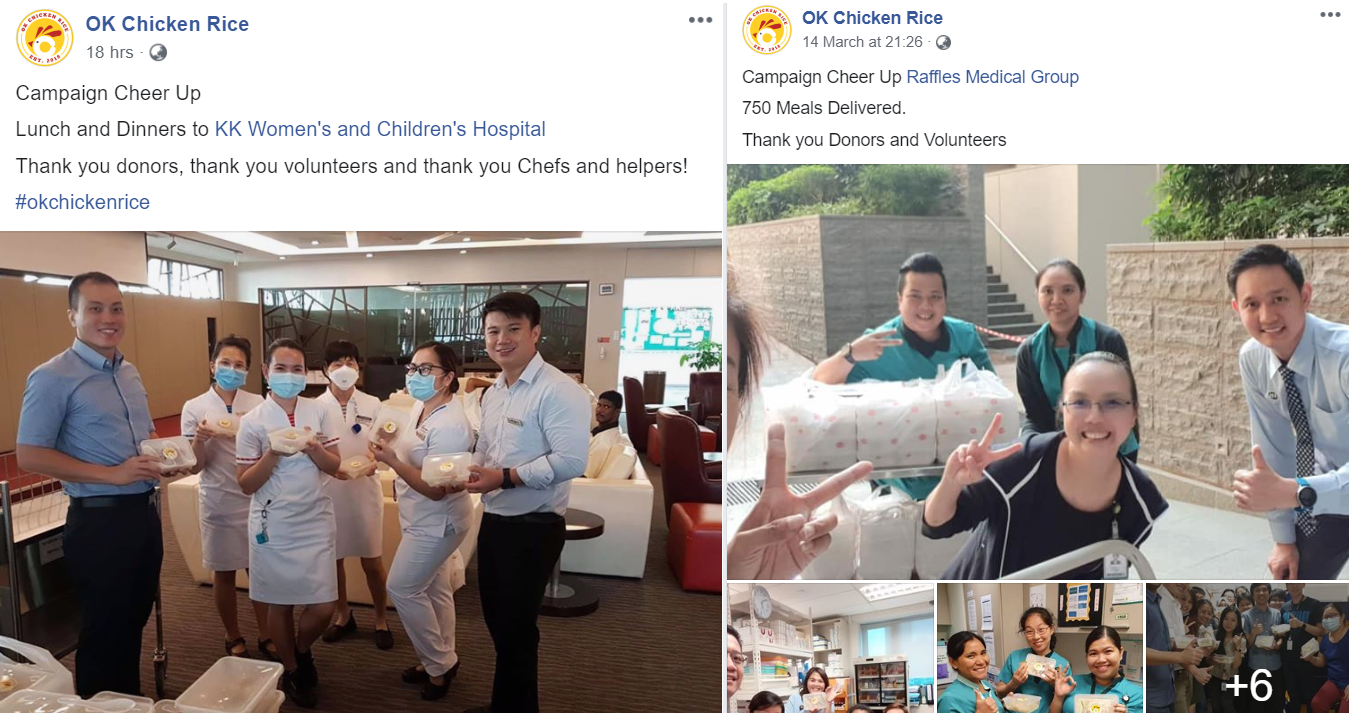 Owner of OK Chicken Rice, Daniel Tan, took the initiative to deliver free meals to healthcare workers as an “encouragement of love,” after reports of nurses being ostracized on public transport for wearing their uniforms during this outbreak period surfaced online. Meanwhile, his wife started “Cheer Up,” an online campaign to raise money to fund the production and delivery of packs of food to healthcare workers. As of February 25, about US$18,310.96 (SG$26,000) was raised and about 1,200 packs of food were delivered. 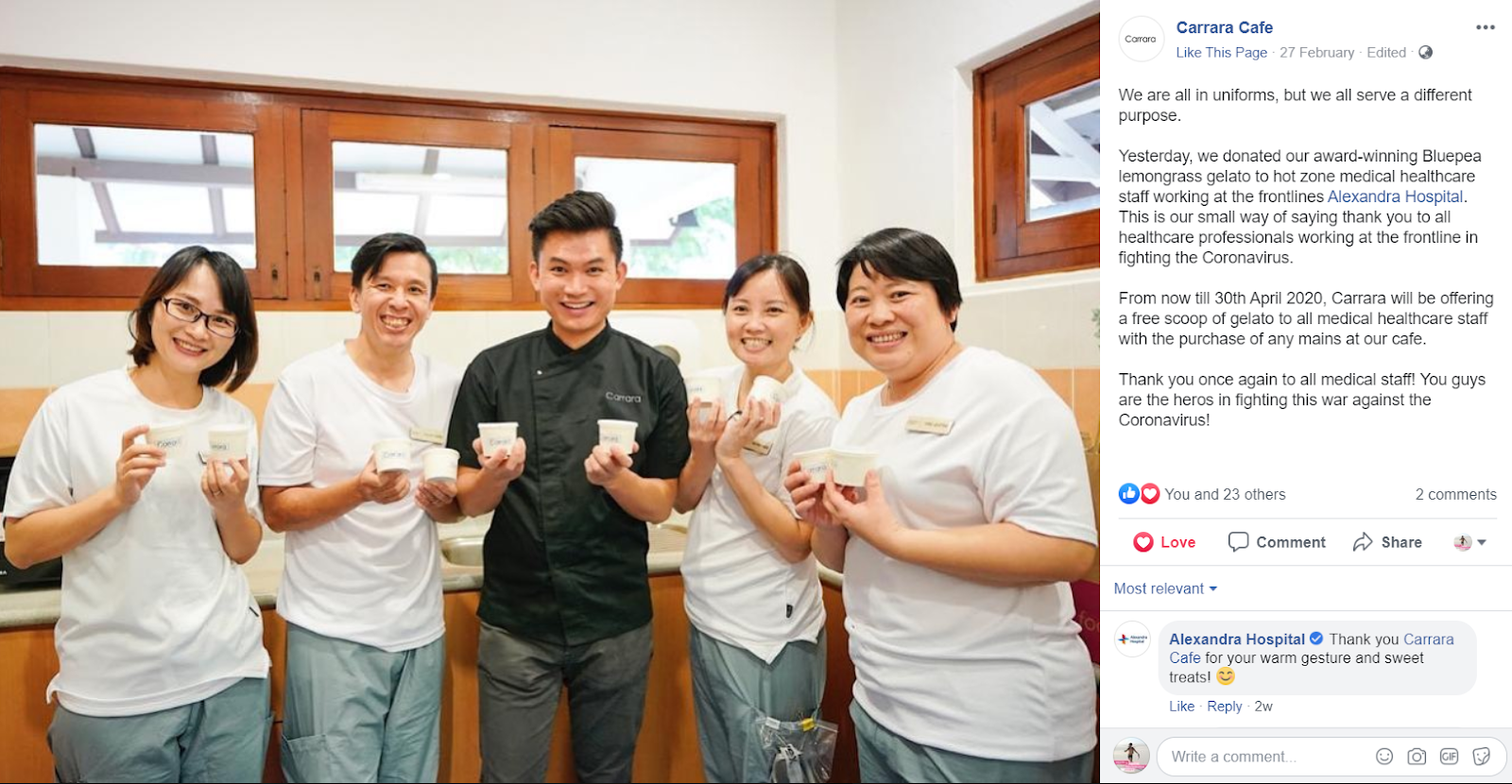 Despite a reduction in the number of walk-in orders, the cafe still decided to offer 80 cups of gelato for free to medical workers. In addition, should medical workers purchase a main dish at their cafe from now till the end of April, they will get an additional free scoop of gelato.

The fast food giant has expressed their support for healthcare workers and sent free food and drinks to V. Luna Medical Center in Quezon City. McDonald’s Philippines said that they will be reaching out to more hospitals during this period. 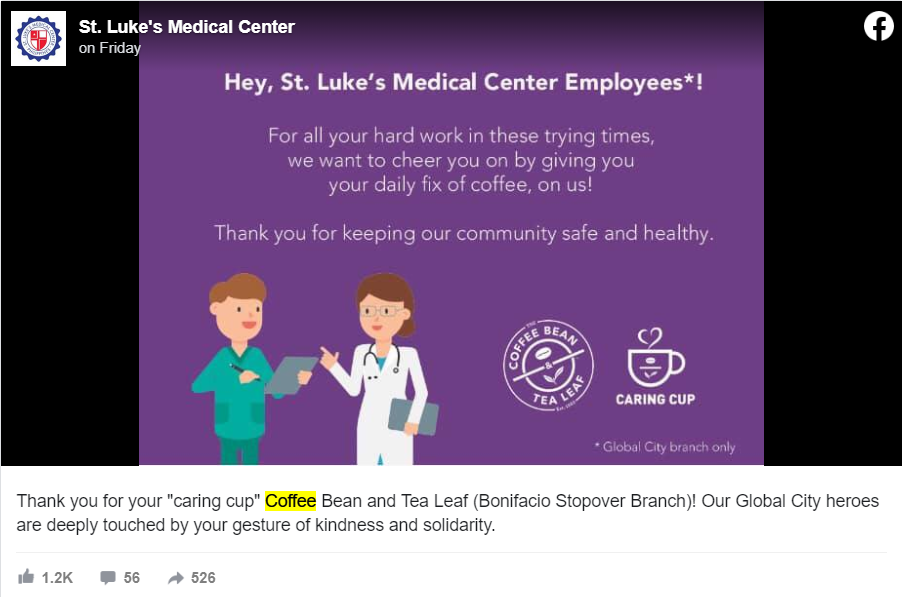 Coffee Bean and Tea Leaf gave healthcare workers of St. Luke’s Medical Center a “caring cup” which can be used to collect a free cup of coffee! The hospital responded with a Facebook message to thank the cafe franchise for its “kindness and solidarity.” 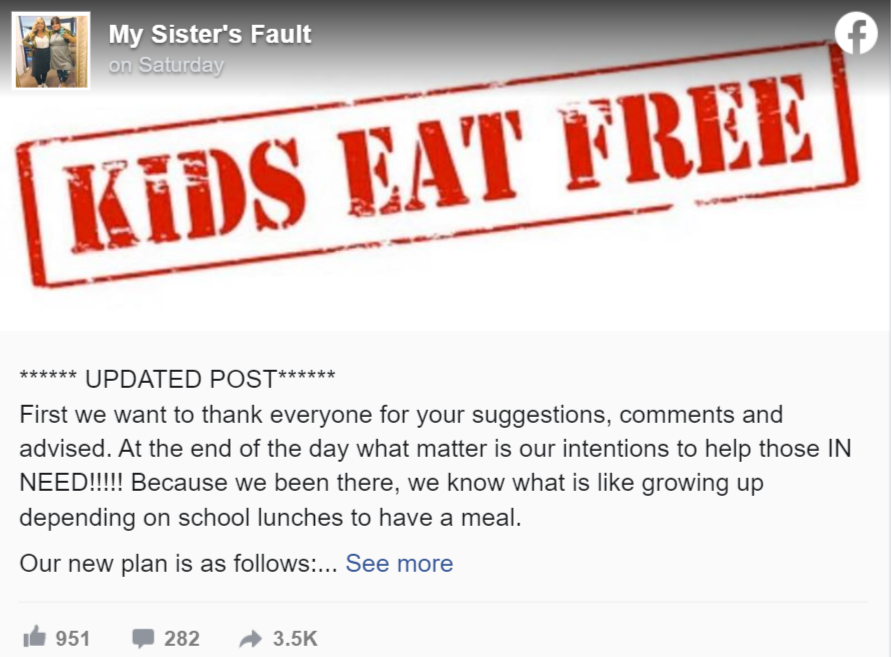 The bakery and restaurant from Delaware announced that they will be providing school-age children with free meals from Wednesdays to Fridays for two weeks. This came after Delaware declared a state of emergency and closed schools, cutting off children’s access to school lunches. 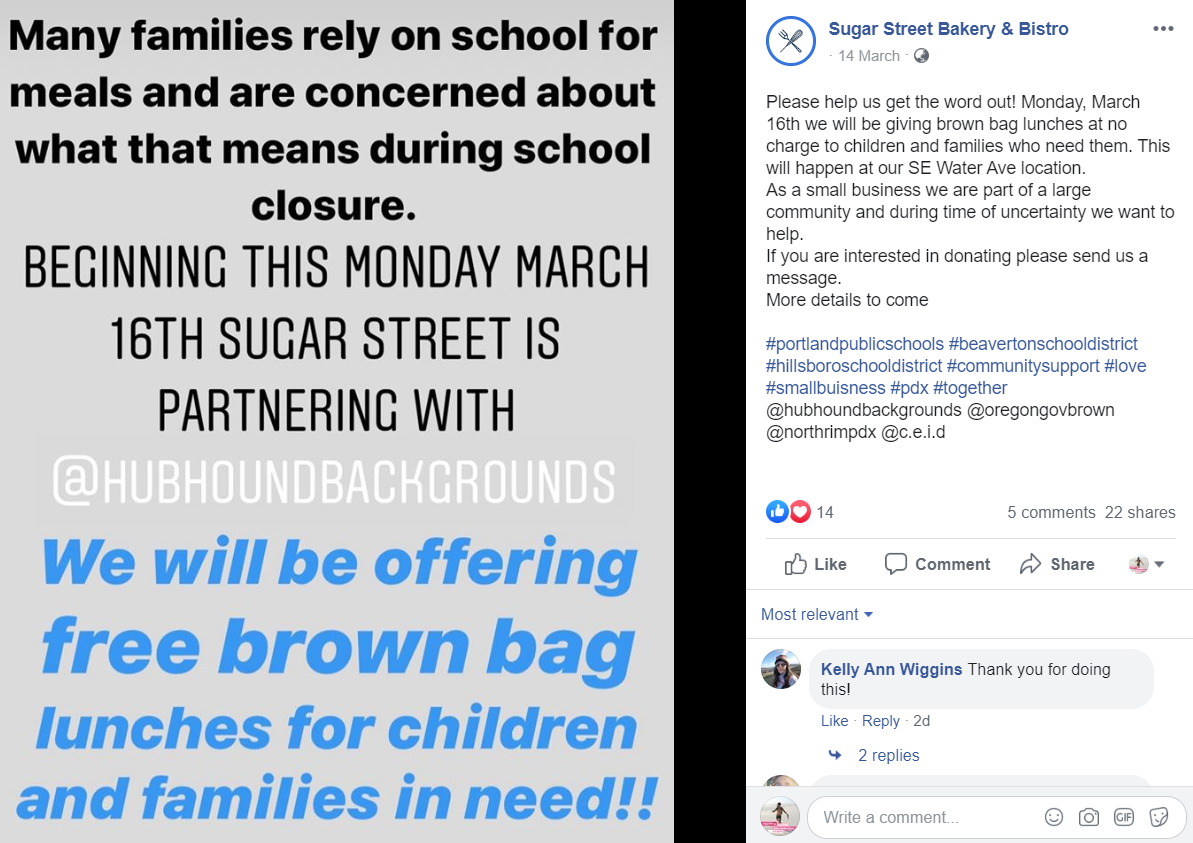 This restaurant from Southeast Portland is offering food to children as well as families in need. At least 1,500 meals have been prepared for the purpose of being distributed to those in need.

SPC Group, a South Korean conglomerate that owns established franchises such as Paris Croissant, Paris Baguette, and Caffè Pascucci, has said that it will be donating bread and water for a month to Daegu and North Gyeongsang Province. Furthermore, the group also donated US$32,380.80 (₩ 40,000,000) worth of “Happy Points” to children in low-income households in those provinces to help them get through the extended school holidays. The points can be used like cash in any of SPC’s food franchises. These include Paris Baguette, Baskin Robbins, Dunkin’, and the Pascucci coffee chain.

During this period when all our news channels and social media feeds are dominated by stories of hardship and sickness, it’s great to read about these acts of kindness. They may seem small in the face of the global coronavirus crisis, but hopefully more people will be inspired to help others in this time of need.

This article was originally published on Pizza Marketplace, and is adapted from Robert's guest post.

“Innovation with a twist on the familiar” - that’s Taco Bell’s product philosophy. The popular Mexican-inspired American...

In this week's Workstream Webinar, we are joined by Gregg Imamoto, CEO for Pieology, a fast casual pizza company with 15...