Chipotle's Digitization Strategies - How to Succeed Despite COVID-19

Hiring and Firing - 10 Statistics You Must Know Before Firing Someone

Everyday in America, tens of thousands of employees are being hired or fired. While each of these is either a triumph or a tragedy on its own, the numbers make up some rather fascinating statistics that employers, hiring managers, and employees should be aware of. Here are ten eye-popping statistics that you should know about hiring and firing in America.

1. Firing an employee can cost employers up to 150% of their salary.

Turnover is rough on the employee being fired, but it’s no cakewalk for the company either. A vacated position leads to lower productivity and new hire costs including interviewing time, training, and potentially paying recruiters to help fill the spot.

Some estimate that all these costs can add up to 150% of the fired employee’s annual salary, especially when it comes to mid-to-high level executives. Even with entry level employees, it’s estimated to cost 30% to 50% of their annual salary to find a replacement. 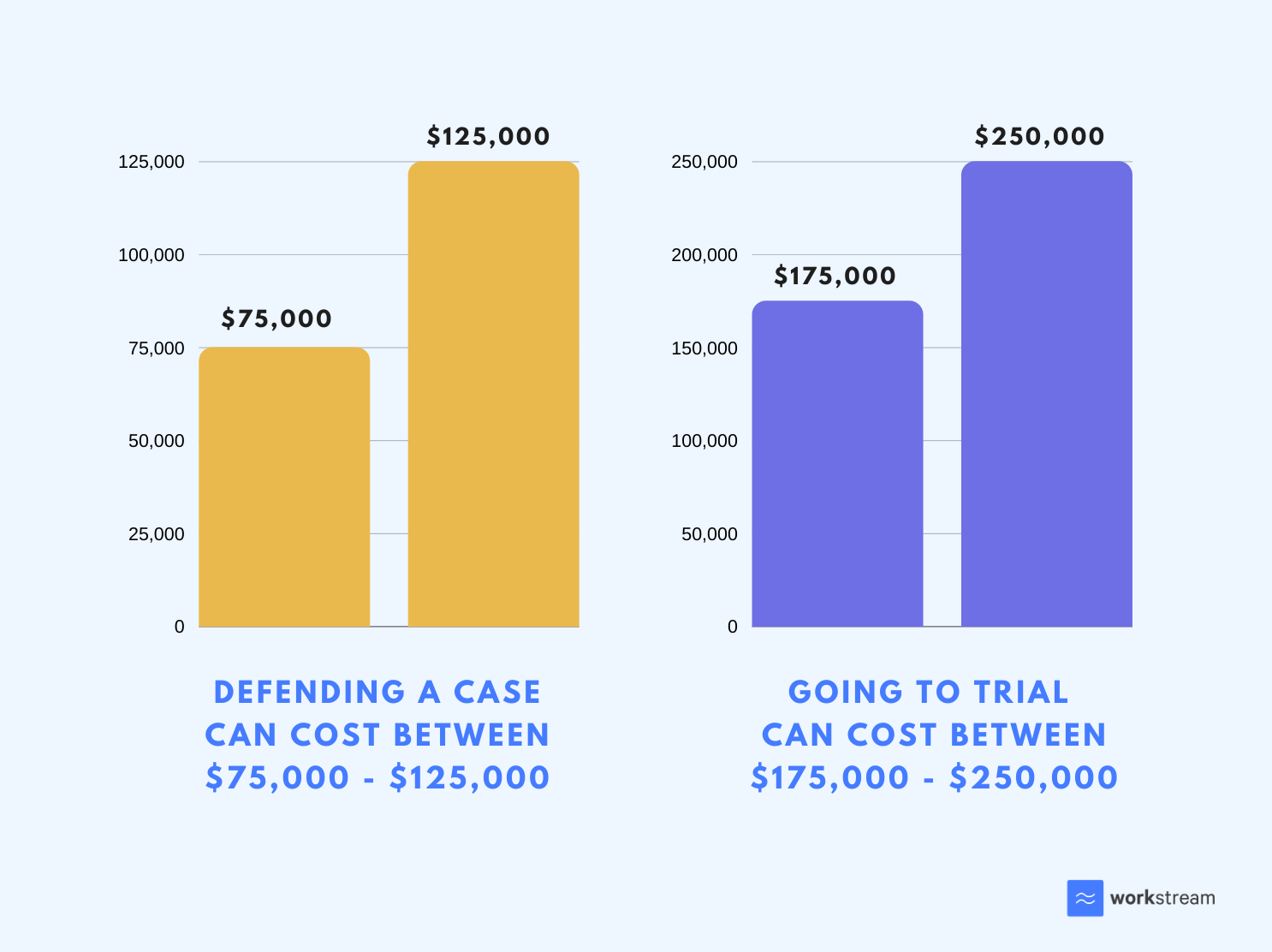 And the rub for employers: if the employee has a lawyer, they can expect to receive compensation (via settlement or award) 64% of the time! With sky-high costs like this, it’s incredibly important to do everything by the book when deciding to fire an employee.

You’d assume that companies carefully interview and vet candidates before signing them up, but it’s basically a coin-toss whether a new hire will find success or not. 46% of newly-hired employees fail within a year and a half of being hired.

“Fail” here is a broad word to describe not performing to expectations, which generally leads to either discipline or a firing. In a sense, this could point to training or onboarding not being up-to-snuff at the company. Or it could be that…

4. 23% of workers felt misled during the job interview.

It’s common for the actual day-to-day job to be different from what was described during the interview, and this leads to immediate dissatisfaction from employees; 23% of them according to a survey by kununu. Imagine getting hired for someone you are excited about just to find out that the job is not what you expected it to be at all.

When hiring, it’s important for the hiring manager to communicate the position accurately. Yes, your company might be desperate to fill the vacant position quickly, but remember how costly turnover is from our earlier statistic. It’s actually better for your company to make sure the employee-to-position fit is perfect before making the hire. It’s a simple concept, yet 6 in 10 employees say their new job differs from what they expected.

5. 94% of job interviewees want feedback on how they did.

A job interview in and of itself is stressful enough, but not having any idea why one didn’t get hired can be even more frustrating to deal with. Surveys show that the vast majority of candidates, 94% of them, want to receive feedback about their interview performance. Yet, only 41% of them get it.

Hiring managers often think sending a polite rejection email is the end of the relationship. What they don’t realize is that just because a candidate wasn’t the right fit today, doesn’t mean she won’t be the right fit tomorrow. And candidates are 4 times more likely to consider a company again in the future if they are provided constructive feedback.

Preparing for a job interview is common, but the main thing one might want to practice is staying cool. In a survey about what they fear most during a job interview, the biggest fear was “having the jitters, as 17% of Americans stated being too nervous as their top concern.” The second biggest fear was feeling that they are overqualified for the job they are interviewing for (15%). Interesting how the top two fears seem to be dynamically opposite of each other!

The road to getting hired can be an anxious one for the candidate. Knowing these top fears can help savvy hiring managers conduct interviews better, putting both women and men at greater ease by addressing these fears.

For hiring managers looking to bolster their retention numbers, they might want to look into hiring more remote workers because they are 50% less likely to quit. Especially today, during the ongoing pandemic, more employees and employers are seeing the benefits of remote work. It saves money (overhead, commuting), healthier (less eating out, more time to exercise), and just as productive, if not more.

Hiring is changing faster than ever before, and the companies who embrace virtual interviews and remote hires are winning during this time of social distancing. With new data showing that remote workers are happier and more productive, hiring will continue to trend in this direction for the foreseeable future.

8. Internal hiring has increased 10% over the last 5 years.

A LinkedIn report highlighted another good way to increase employee retention: hire internally. Promoting from within, or even lateral moves to different departments, have a positive impact on an employee’s tenure with the company due to them feeling valued. This makes sense considering one of the most cited reasons for leaving a job is lack of opportunities to advance.

This benefit is becoming more widely known as internal hiring has increased 10% since 2015. It’s also cheaper to find talent already in-house than to go recruiting, and a win-win for both parties. We expect even higher percentages of internal hires in the next five years as more companies look to increase retention rates.

9. Federal employees have a 99.47% chance of never being fired for cause.

Speaking of retention rates, nothing beats government jobs when it comes to job security. Federal employees have a 99.47% chance of never being fired for cause, so if you either never want to be fired, or you are a hiring manager who never wants to do any firing (we know how stressful that is!), then working for the government will insulate you from all of that stress.

The U.S. Department of Education was the “safest” job, with a termination rate for cause at just 0.14%. Now’s a good time to say that while a high turnover rate is a bad thing for a company, a turnover rate that’s too low might be a sign that too many bad apples are being left in the bunch. When firing is a blue moon event, that might be a sign of poor management.

But at the end of the day, getting fired isn’t the worst thing...

How’s that for resilience? Many employees will be fired during their careers, and it might seem like a huge blow at the time. But a survey of 2600 leaders showed 45% suffered at least one major negative career event and yet 78% of them still made it to the CEO role. It goes to show that for the most ambitious people, getting fired is just a speedbump, not a dead end.

And for squeamish hiring managers who hate firing anyone, hopefully this statistic will show that it’s not the end of the world for the employee getting fired. Sometimes, firing someone can be the best thing for their career. Operative word is “sometimes” of course!

What is an Applicant Tracking System (ATS)? Complete Guide 2020

Workstream works with over 5,000 hiring managers to streamline their end-to-end hiring process from sourcing, screening ...

Chains are on a Hiring Spree Some good news this week as medical experts are hopeful about the announcement of a COVID-1...