The Subway Success Story & Their Fight against COVID-19

Workstream Weekly: Hiring on the Rise, Remote as the New Norm, & More

“True individual freedom cannot exist without economic security and independence. People who are hungry and out of a job are the stuff of which dictatorships are made." - Franklin D. Roosevelt

In this week’s newsletter, we look at the jobs data in some reopened areas, the impact of the pandemic on female workers, and what experts think jobs will look like in a post-coronavirus world.

Join our live Q&A with K. C. Kanaan (CEO, Envoy America), and Allison Sproul (Leader of People & Talent, connectRN) and learn how they've hired and advised a combined workforce of over 10,000 caregivers, nurses, and drivers. Find out what actions they've taken to protect their workers and the communities they serve, which have been the hardest hit in 2020.

See you this Wednesday at 12PM PST!

Statistics site fivethirtyeight.com recently put out some data on how the gradual reopening of states are trending in terms of unemployment and hiring numbers. While the entire article is worth a read for all of the context behind these data points, there are two things to point out: 1) continued unemployment insurance claims fell in May for the first time since early March; and 2) total job postings on Indeed have increased in each of the past three weeks. 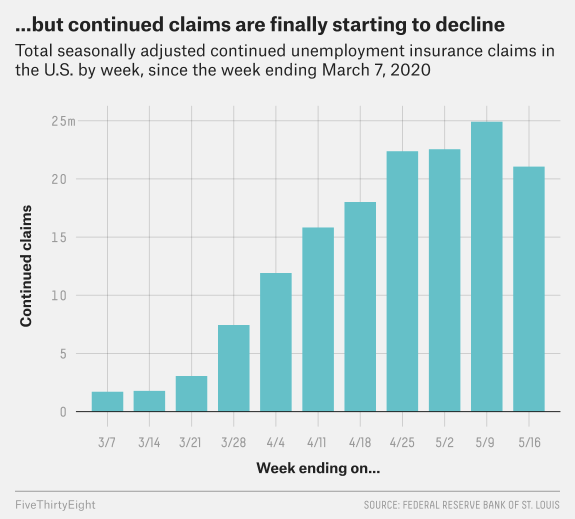 It's good news, but not great news. 538 points out that jobs volume on May 22nd was 35% worse than a year ago, but if companies are looking for signs-of-life in the American economy and jobs market, we are seeing it.

But the numbers don't immediately point to states reopening as the driver of the hiring increases. Of the four states that reopened the earliest, two have seen job post increases and two haven't. There are more positive signs of hiring in the 11 recently opened states, but it's still a bit early to tell how much of a jobs surge they'll see.

The Takeaway: Job losses may have hit a bottom if continued unemployment claim numbers and job post numbers are signals, which is great news. But signs also point to a slow recovery that's inexorably tied to what the virus does in the next few months. In short, be optimistic, but be diligent as well.

Millennial women are seeing an unfair share of job loss.

The oldest Millennials are almost 40 now (where does the time go?) and with a generation larger in number than Baby Boomers now in middle-age, it's no wonder that they make up the largest proportion of job holders. Unfortunately, it almost means this generation, which already lived through the 2008 downturn, is being hit hard with unemployment. Especially women. Call it a "shecession" if you will, as women made up 55% of recent layoffs and are also being hired at a lower rate than their male counterparts.

The main reason for this? Child rearing. Millennial women are the most likely age group to get pregnant, and trying to find a new job while about to, having, or just having had a child is not easy. They also do the majority of the homeschooling during quarantine. These are all incredibly important jobs to do, but also puts women at a disadvantage when they want to return to corporate jobs post-pandemic.

The Takeaway: Hiring managers should always strive to hire women who may have had to step away from the workforce due to family. Now it's doubly important to be aware of diversity when hiring for millennial women who have missed out on months of work due to both family obligations in the midst of the pandemic.

Fast Company interviewed the chief economist at Glassdoor and a VP of product for LinkedIn, and they both agreed that remote work and "virtual jobs" will be the new normal going forward. A couple choice quotes:

"The share of remote job postings compared to all postings on LinkedIn has grown about 91% from the first week of March to the last week of April. A lot of businesses are now considering, what if this remote working thing just works?" - Kiran Prasad

"You're also going to see more hiring outside the big metro [cities], in the short-term. There are lots of pools of affordable workers. Any place there's a good university with a STEM program, there are pools of young tech workers that could be accessed if companies have more willingness to hire remotely." - Andrew Chamberlain

The Takeaway: The thought of a decentralized business might be frightening to the old guard, but younger workers are digital nomads by design. With an exodus of young adults from the most expensive cities like NYC (see our previous newsletter), a "business" may no longer be a building, but rather an idea connected by remote workers.

If an employee quits, but no one is around to do an exit interview, do they affect any change? This ancient zen question...

The weekly Workstream Webinar brings in different business owners of various industries in to share about their experien...